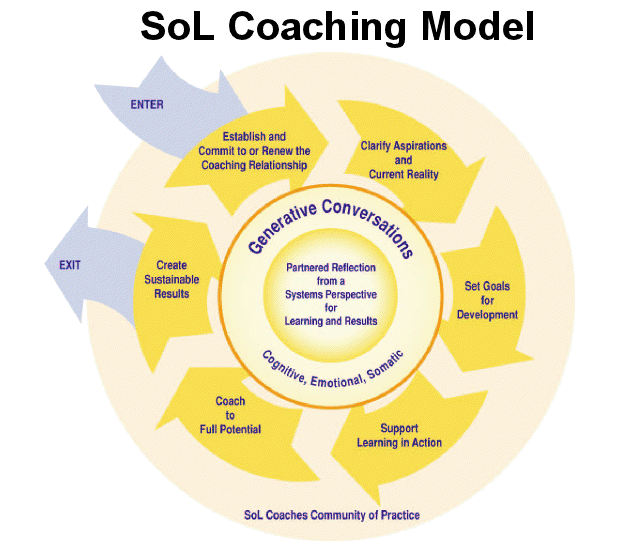 Origins of the Society for Organizational Learning (SoL) Coaching Model

The Society for Organizational Learning, (SoL) Coaching Model was developed in 2003 by members of the SoL Global Coaching Community (SGCC)*—with some expert facilitation support from Grady McGongill. The model has undergone several enhancements over the past decade based on the continuing field experience of coaches in the community.

The model development work began at a time when SoL had just been awarded a 5-year coaching contract with a large US government agency. Over the course of that contract, 25 SoL coaches coached more than 350 senior managers at the agency. The scale of the work elevated two key questions for the community:

Several members of the Systems Perspectives team were involved in this development. The model depicts the cyclical and iterative components of the coaching process in a way that has proven particularly valuable for helping new clients get oriented to coaching as a learning process.

From the beginning, we defined the core of the work as partnered reflective conversation for learning and results. The most recent enhancement of the model occurred in concert with the development of the Coaching from a Systems Perspective course, when we clarified that a “systems perspective” is also essential to our coaching approach, and belonged in the center of the model. Having been involved in its creation, we at Systems Perspectives, LLC have adopted this model as a visual depiction of our process for coaching.

Reflection, Collegiality, and Civil Discourse: Revitalizing the Essence of Academia